homeWatermelonIs it possible to plant watermelons and melons nearby

Is it possible to plant watermelons and melons nearby

It is important to correctly distribute the territory on the garden plot. This is due to the peculiarities of plants, because there are crops that are combined with each other, and there are those that can interfere with the growth of a neighbor. So, in order to get a good harvest of melons and gourds, it is worth figuring out whether it is possible to plant watermelons and melons together.

Selection of varieties and planting of watermelons

Watermelon is a melon crop, an annual plant from the pumpkin family. It has a sweet, aromatic, juicy flesh of pink or red color (sometimes you can find yellow or white watermelon), with black small seeds. It is desirable to sow it in the ground, since the seedlings usually do not take root well. It is important to choose the right variety. The choice depends on:

For example, Skorik and Ogonyok varieties are suitable for Siberia and the northern regions. They are early maturing (the first watermelons appear within 60 days after germination), unpretentious and frost-resistant. They can even be planted in open ground.

When the soil is warmed up enough and the temperature is about 15 degrees, the seeds are planted in holes in 2 pieces. 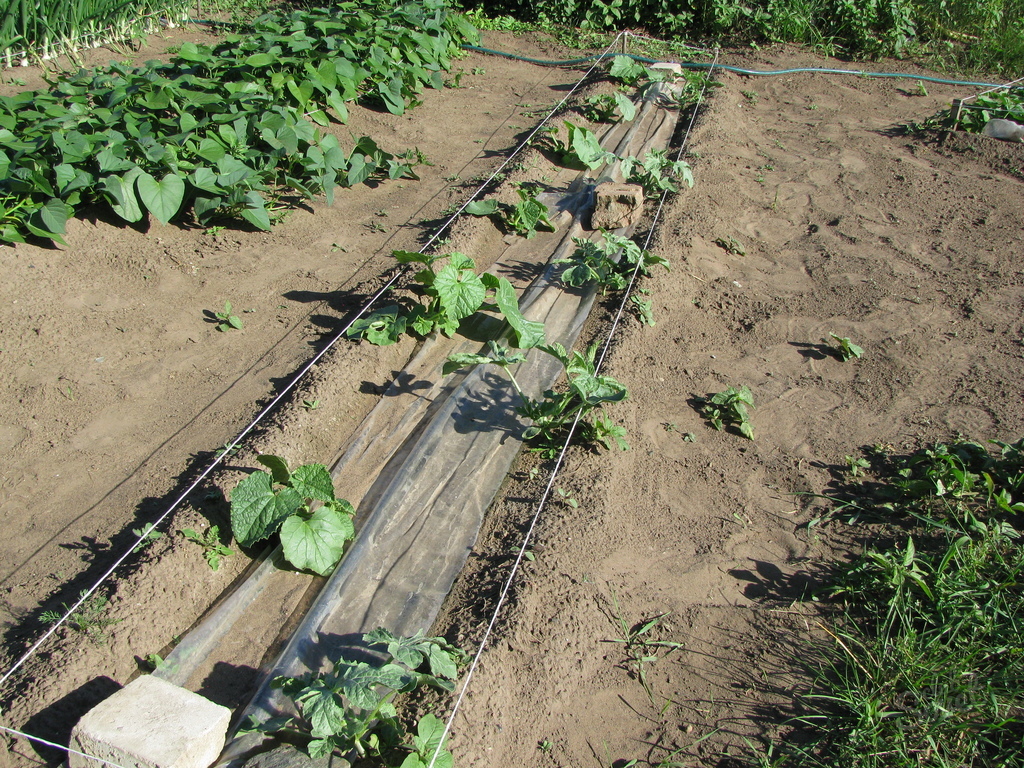 Important! The distance between the holes should be about 1 meter, as watermelons grow strongly. In a greenhouse or greenhouse, the distance can be reduced to 70 cm.

They grow watermelons and seedlings. To do this, it is better to use special peat pots, which themselves decompose in the ground. Planting watermelon seedlings should start in May. The watermelon grows quickly, it is impossible for the seedlings to outgrow, otherwise it will not take root.

Watermelon compatibility with other crops

Is it possible to plant melons next to zucchini

To get a good harvest, you need to know some secrets of growing this crop, with which you can plant watermelons in the same garden, and with which you cannot. It is known that some cultures have a beneficial effect on the growth and development of each other, and some - on the contrary.

To determine whether it is possible to plant watermelons and cucumbers nearby and which neighbors of a watermelon in the garden will not interfere with its growth, it is necessary to take into account certain features.

The proximity to different plantings affects the watermelon in different ways. Almost any crop should be planted with caution next to a capricious melon berry. It can both help him in growth and development, and impede life and fruiting. 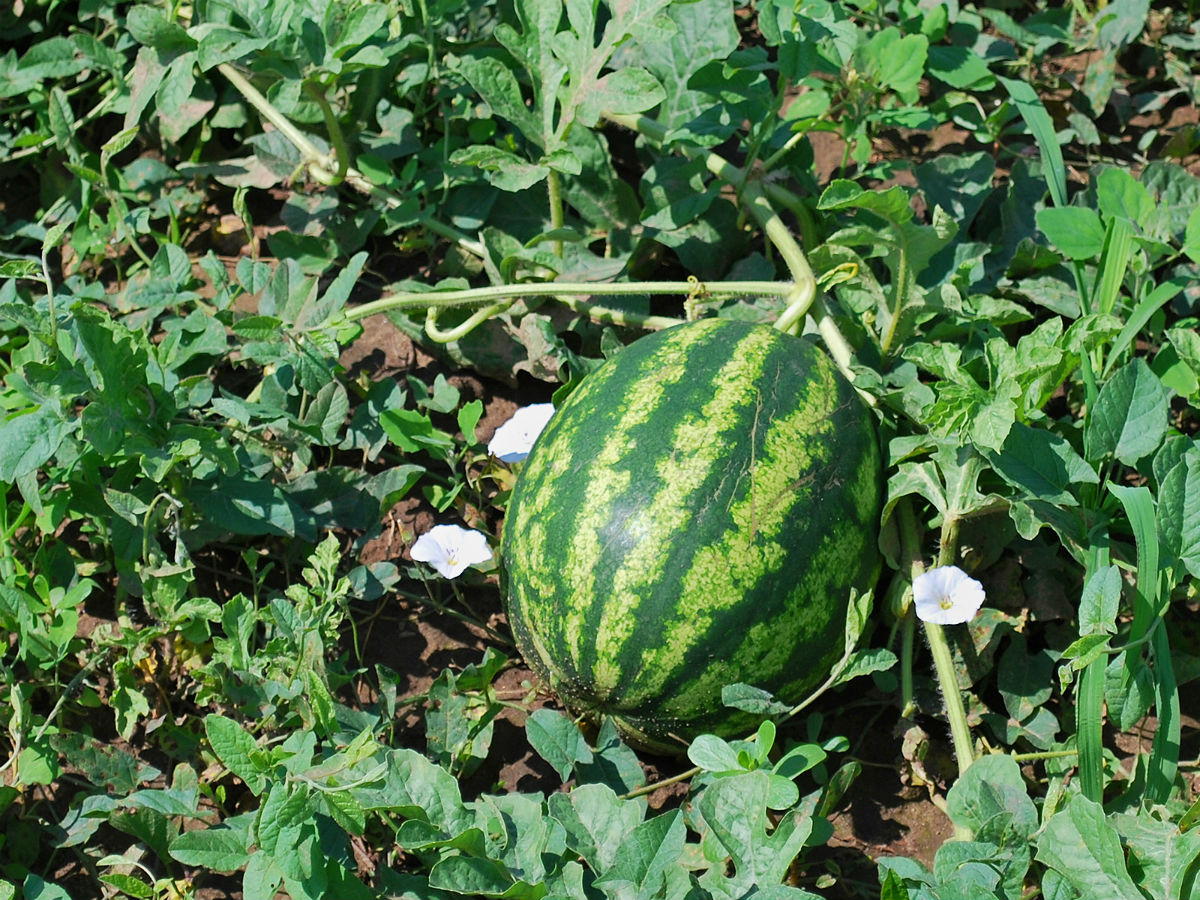 Watermelon in the garden

Planting next to a pumpkin

It is undesirable to plant some melons and gourds close to each other. Watermelon and pumpkin are not planted together. Since they are usually self-pollinated, they can become over-pollinated.This will lead to mutation and the crop may turn out to be very unusual in shape, color, taste (for example, green pumpkins may grow instead of orange).

Note! Seeds obtained from such mutations are unsuitable for further planting.

You can not plant watermelons and zucchini and other crops of the pumpkin family.

Planting next to cucumbers

Due to over-pollination, they also cannot be planted next to cucumbers. Fruits in such a neighborhood will grow savory, will be devoid of aroma, and may be deformed.

Planting next to potatoes

Melons "take" a lot of nutrients from the soil, so it is not recommended to plant them next to root crops: potatoes, carrots, beets, radishes. These crops can die or produce poor harvests. In addition, potatoes can shade watermelons, tall bushes will close the creeping shoots. Also, both are susceptible to the same diseases and are affected by the same pests, therefore, if one culture becomes infected, the disease will be transmitted to the other. 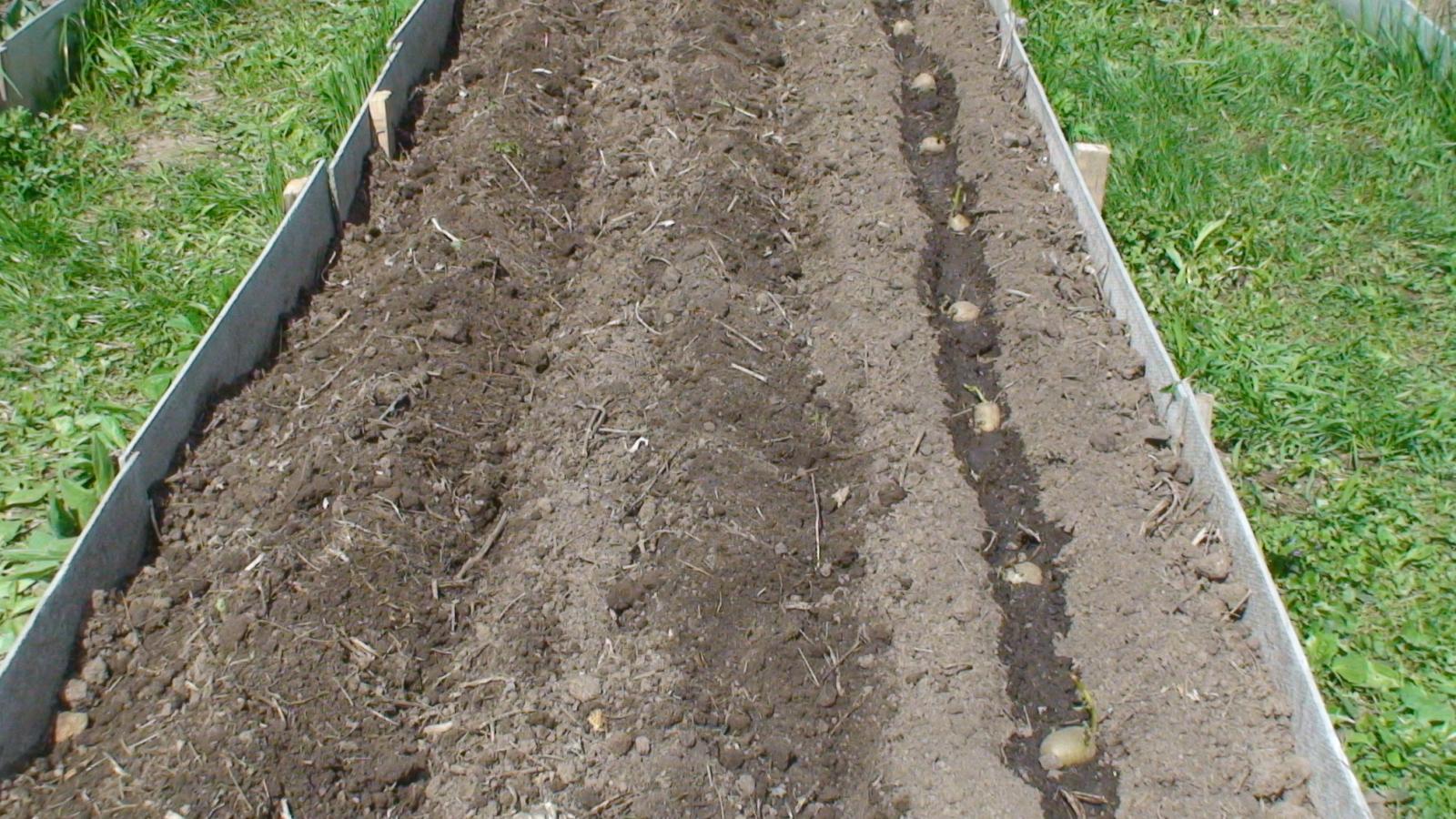 Potatoes are not the best neighbor for a watermelon

Planting next to tomatoes

Tomatoes are very good neighbors for melons. Planting a watermelon in a tomato greenhouse has a beneficial effect on the growth of both crops.

They also coexist well with peppers due to their short stature and similar care conditions.

Some flower crops have a beneficial effect on the growth, development and fruiting of watermelons. For example, marigolds, nasturtiums, phacelia. They can be grown in circles or grooves.

What you can't plant next to watermelons

As mentioned, watermelons are not planted with cucumbers, zucchini and pumpkins. It is not recommended to grow watermelons near any root vegetables.

Important! Melons and gourds "suck" almost all the useful minerals from the soil. Therefore, they need to be planted every year in a new place, and the old one must be planted with crops that neutralize and restore the soil, for example, peas, sunflowers, corn. You can simply give the land a "rest" or sow it with phacelia. 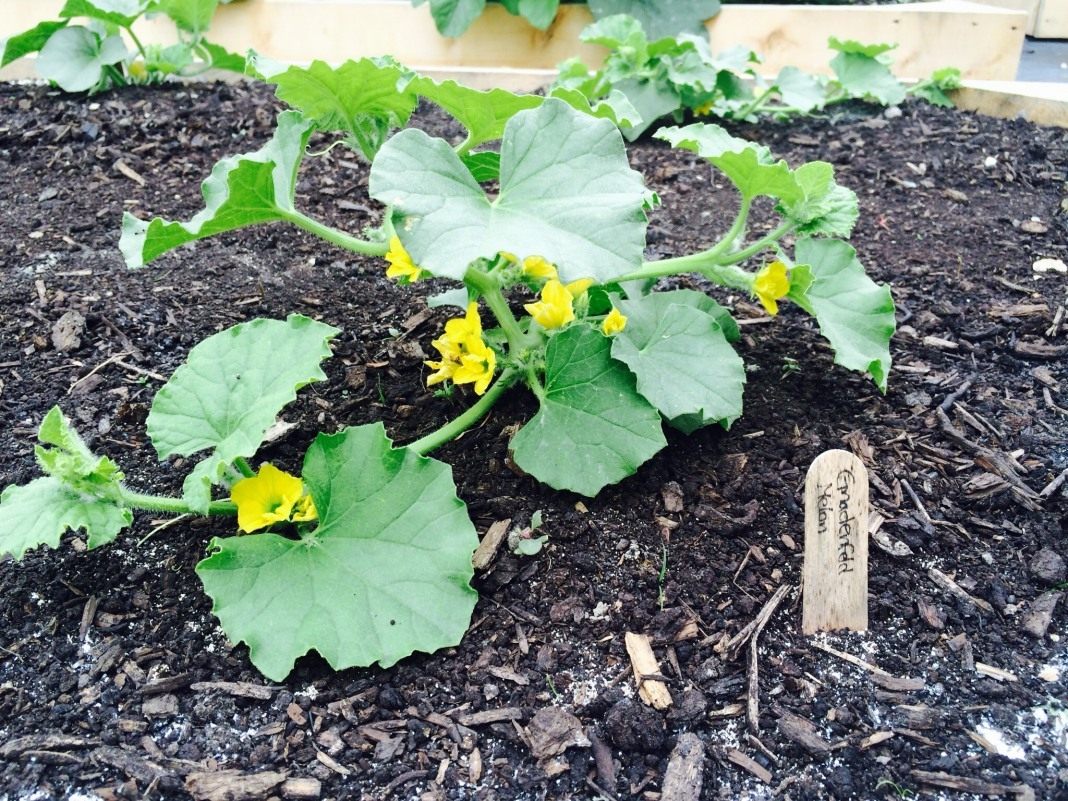 Is it possible to plant watermelons and melons nearby

It turns out that they perfectly coexist Melon - this is an annual melon crop. Despite the fact that this plant is related to watermelon, they grow beautifully nearby, but you need to remember that they grow very much, so they need a large area.

Culture goes well with melons. This is due to a number of features:

Important! Exposure to the same diseases is one of the disadvantages of their compatibility. If one culture gets sick, the other gets infected.

How to properly grow watermelons and melons nearby 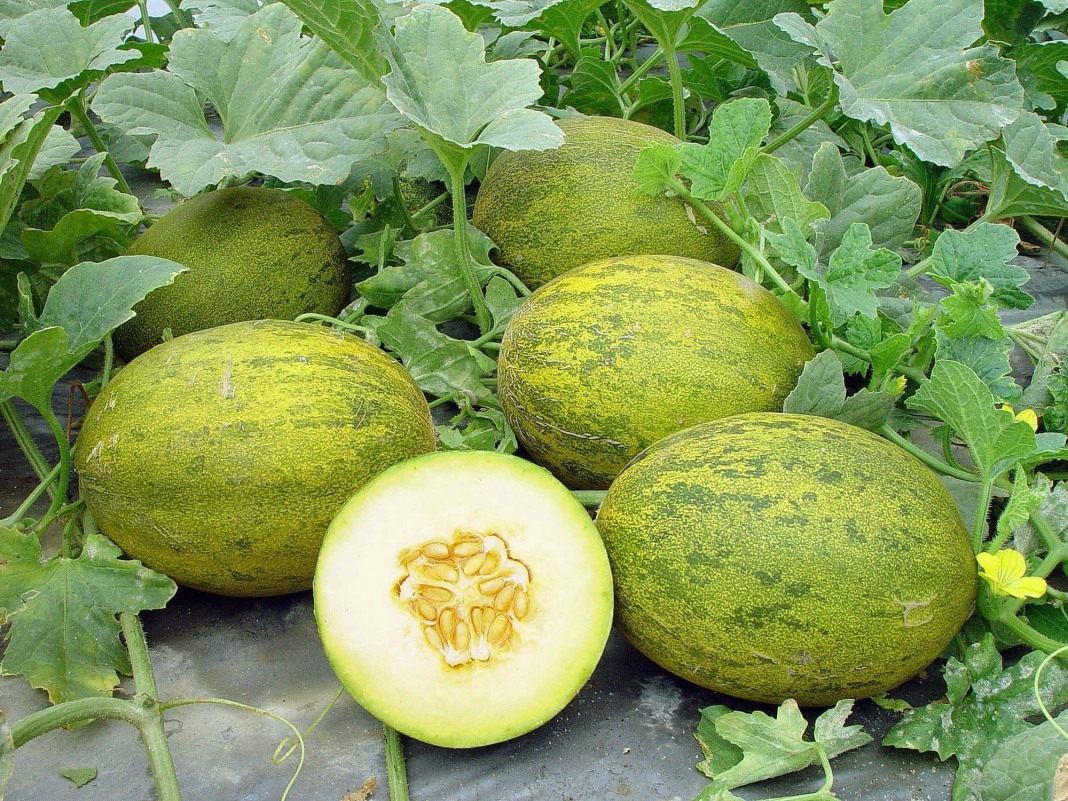 Melon in the garden

First you need to prepare the seeds. It is best to use those left over from the last harvest. If there are no such seeds, you will need to dry ordinary seeds at a temperature of 35 degrees for several days.

Melons are planted to a depth of about 5 cm. Both crops love sandy and sandy loam soil, so if the soil is not like that, it is better to start preparing it in the fall. For this, about 5 kg are brought into the ground. manure, superphosphate, ammonium sulfate, potassium salt.

Care consists in loosening at least 5 times over the summer (the first time - when the sprouts appear and grow stronger). Top dressing should be carried out at least 2 times: the first - when several leaves are formed on the plant. The next time feeding is done during the flowering period.

Crops are very prolific so they cannot be placed close to each other. The scourge can intertwine.

Both those, and others love feeding with manure and bird droppings. Prepare it like this: insist 1 glass of fertilizer in 10 liters of water, strain.The area with melons and gourds is watered with this solution.

Attention! In no case should you often water melons. This will lead to decay of both roots and fruits. Watering is necessary on average 2 times a week.

If the fruits are grown in the northern region, you need to direct the roots not to depth, but in breadth. Since these crops came from hot arid countries, they are adapted to extract water by growing roots as deep as possible. In the northern regions, the roots will simply rot at depth. Therefore, they do not water at the root, but around, along the grooves. 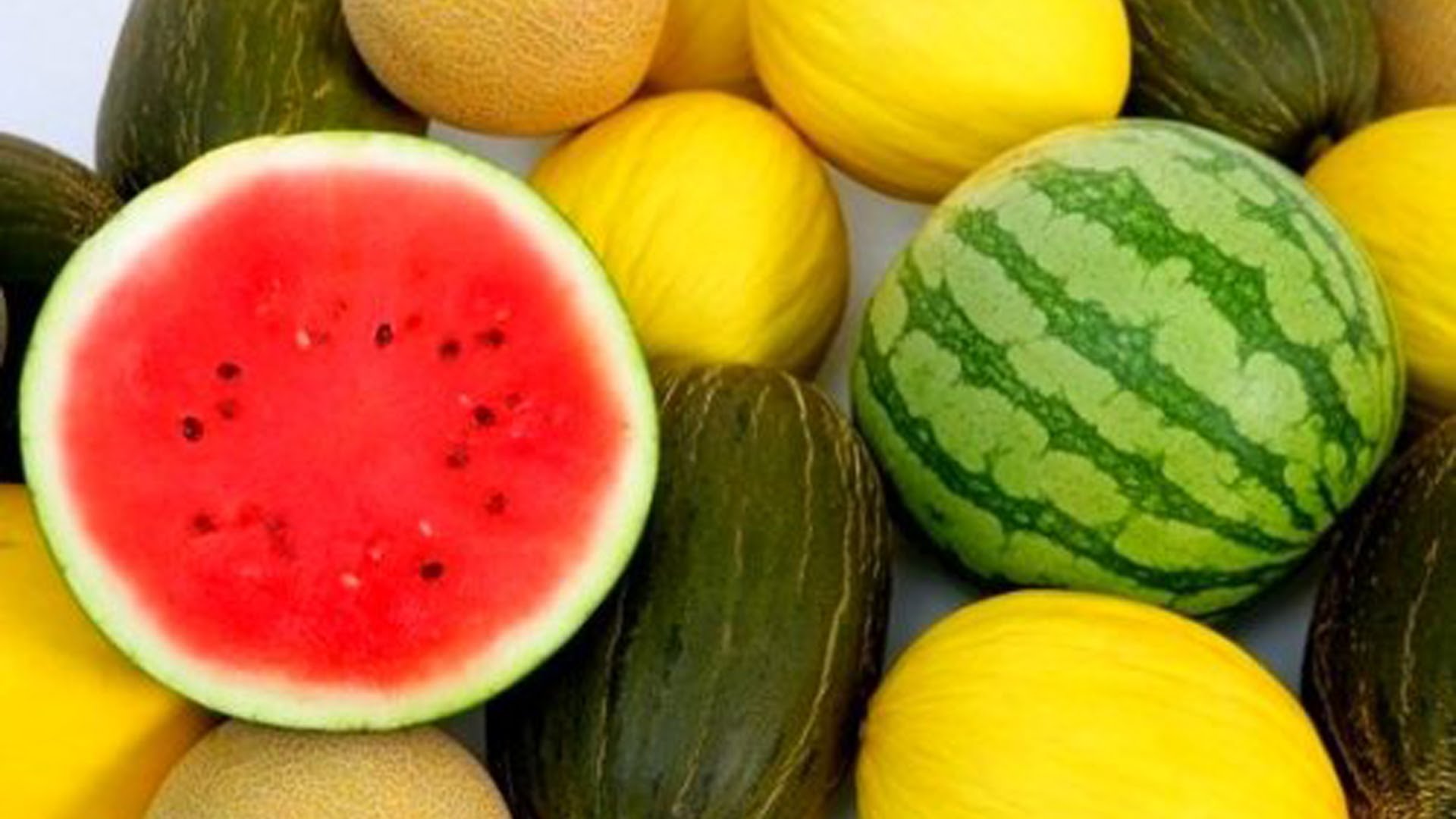 Melon and watermelon are good neighbors

The ripeness of the fruit can be determined by specific characteristics. If the berry is ripe, it has a pleasant sweet aroma, bright color. The fruits lose white bloom, the pattern on the bark becomes clearer, the tail of the fruit dries up, the sound when tapped is dull. On average, early maturing melons ripen in 90 days.

To get a good harvest, it is important to follow the rules for growing melons and gourds. They are quite unpretentious with proper care.

For almost any plant problem, biological growth promoters such as Epin can be used. It helps with diseases, slowing down the growth and development of plants, increasing yields.

So, having figured out whether it is possible to plant watermelons and melons together and observing the rules of agricultural technology, you can really get a good harvest. Watermelon is compatible with other plants in the garden, as long as they do not shade the whips and do not take away the nutrients needed by the melon berry. 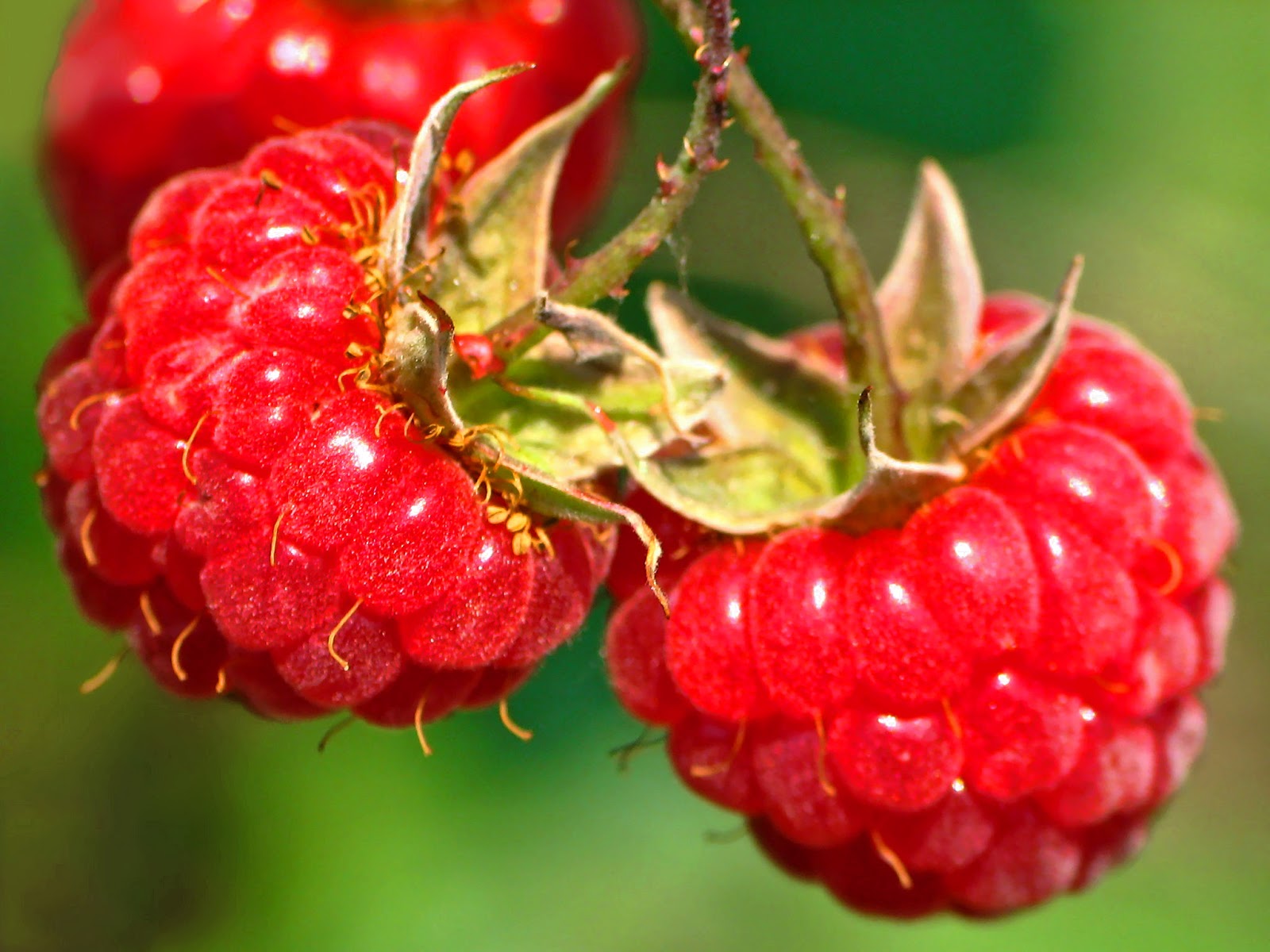