Domestic rabbits reproduce rather quickly. The breeder needs to know some rules to get the offspring without any problems. The birth of a rabbit is often quick, but sometimes difficulties arise that are overcome by the farmer on their own or with the help of a veterinarian.

Childbirth at a rabbit

Novice breeders often ask what the birth of a rabbit is called. This process is called okrol or lamb. Pregnancy in a rabbit lasts 30-40 days. She gives birth only in the absence of the owner. Most often, no help is required for the animal.

In preparation for childbirth, the rabbit (female) is placed in the mother chamber. She is provided with hay and straw for nest building. If okrol takes place in the summer, then no additional effort is required from the farmer. In winter, cover the floor of the mother liquor with a layer of sawdust 50 mm thick, and pour hay on top. 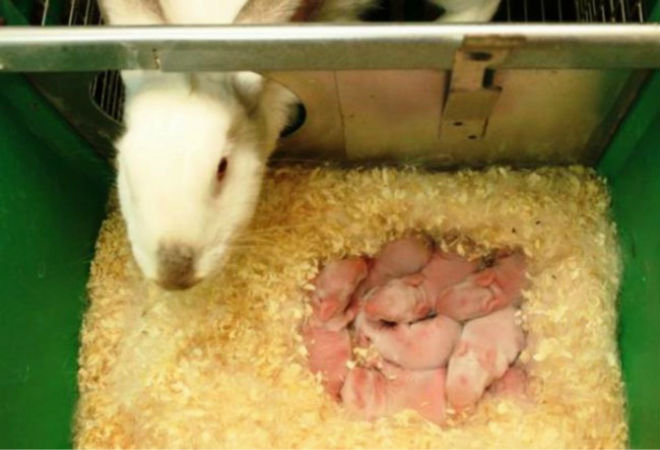 Childbirth at a rabbit

Important! Do not use scraps of resinous or strong-smelling wood.

You can ask your veterinarian how rabbits give birth. The okrol duration does not exceed 20-30 minutes, but in some cases this time is extended to 60 minutes. The more rabbits are born, the shorter the duration of the process. If the female was unable to produce the offspring within an hour, it is recommended to call the veterinarian

The farmer will see how rabbits are born when he receives the first offspring. Usually these are small pink lumps up to 5 cm long. Ears, closed or open eyes are clearly visible. There is no fluff or fur on the bodies, so it is better to cover them with hay right away. If everything is normal, the female will start feeding her babies, letting them near the nipples.

Rabbits are deposited from their mother in 1-1.5 months. If a decorative species of animals is bred - 60 days after the birth. 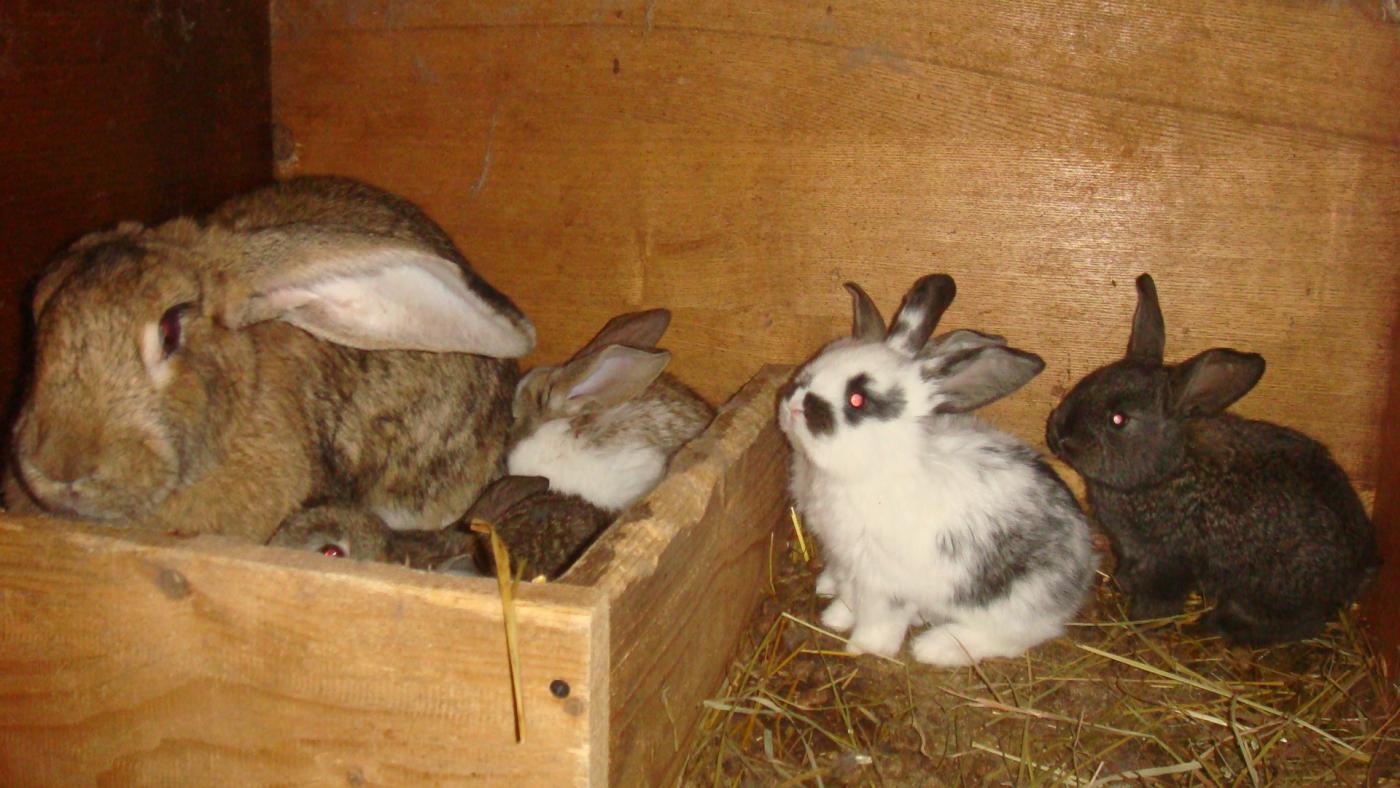 Rabbits are deposited from the mother after 1-1.5 months

Note! If a farmer breeds rabbits of large breeds (they are called Giants), then the babies are removed from the mother after 3 months.

How many rabbits does a rabbit give birth at one time

How to feed little rabbits

It is almost impossible to guess the exact number of babies that have appeared. It all depends on many reasons, for example, the health of the female, her diet, etc. When asked how many rabbits a female rabbit gives birth at one time, one can answer that the average number of babies born is 5-6. But sometimes this figure fluctuates between 1-3 or 7-8 copies. Females often fail to give birth to all the rabbits alive, so there are 1-2 dead animals in the litter.

Important! Dead cubs must be urgently removed from the mother liquor, otherwise the mother will not approach the live young or will begin to eat it along with the corpses.

Due to pregnancy, the female becomes fearful and cautious, so any stress can lead to miscarriage or premature birth. This circumstance greatly affects the number of rabbit babies born. If everything is in order, then the farmer should expect to receive 5-7 copies. Sometimes from 8 to 13 individuals develop in the womb, but such cases are quite rare.

The rabbit gave birth - what to do

The rabbit does not feed the rabbits - what to do

After the female spins, it is recommended not to touch live babies with your hands. Otherwise, smelling someone else's smell, the animal will abandon its offspring. First, you need to call a veterinarian to examine the offspring and release it from the intrauterine film. The birth of offspring most often takes place without any problems, but sometimes the mother remains motionless in the corner of the mother liquor. In such cases, only a qualified doctor can help. The patient may develop various diseases, for example, endometritis or listeriosis.

During the examination and possible treatment, the mother is transferred to another room

Note! If there is a rabbit with rabbits in the cage, then for the time of examination and possible treatment, the mother is transferred to another room, and the babies are moved to another female.

The farmer must keep an eye on the female, otherwise the rabbit may eat her babies. Sometimes this happens for the following reasons:

The breeder should monitor the feeding that the female and the newborn group of rabbits receive. During the summer, the mother should be given more greenery, such as grass. Most often, the animal is fed with clover, alfalfa or oat preparations. If the rabbit lamented in cold weather (winter), then she is given high-quality hay, food is diluted with legumes.

After jigging the babies into a separate cage, they begin to gradually feed them not only with milk, but also with other products. Grains softened with boiling water, greens (except parsley) are added to the diet.

Additional Information: it is better not to give fresh milk to babies. This can lead to the development of diarrhea. Such a disease cannot be treated on its own; it is better to call a doctor.

How to know if a rabbit is hunting

Before starting to mate, the female changes her behavior. Her genitals change their state. The genital slit turns red, white and red discharge begins to stand out from it. The flow intensifies, and the nipples of the animal begin to swell strongly. The frequency of this state in females is 40 hours, and lasts about a week (sometimes up to one month). At this time, the behavior of the female becomes more restless. 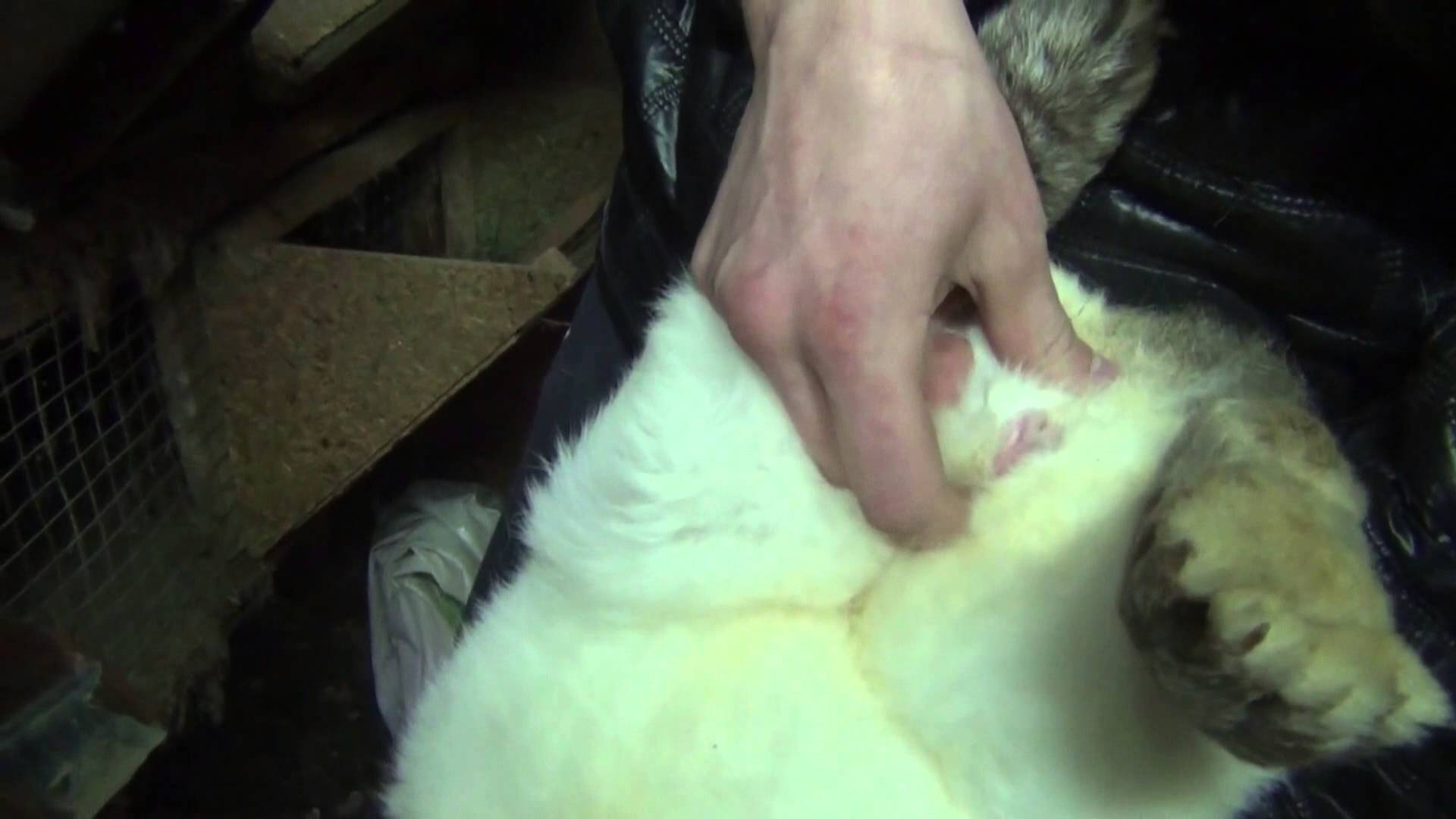 Her genitals change their state

When to remove bunnies from a bunny

How do you know that the rabbit is hunting, what needs to be done for this? Observing the female will help the livestock breeder:

You can check the condition of the animal by stroking from its head to the tailbone. If the female is waiting for mating, then she will have a desire to raise the pelvic part.

Important! To accelerate the state of hunting, you need to lengthen the daylight hours. Therefore, artificial lighting is used in winter and autumn. If this condition is not met, then there is no need to wait for a large offspring.

Can a bunny give birth to one bunny

Some breeders ask why only one rabbit is born, because more animals should appear. This happens quite rarely. This happens either due to the weakness of the expectant mother or in the presence of any disease.To prevent this from happening, the female should be more outdoors, receive a varied diet, rich in vitamins and minerals. The breeder should closely monitor the rabbit at all times and call the veterinarian in time if problems arise. 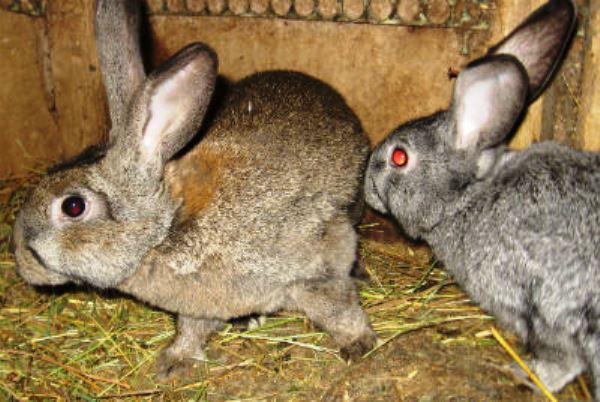 Blood in a rabbit's cage

Rabbit breeders often notice blood stains or streaks in the cages of animals. The cause of these manifestations may be any disease or the readiness of the female to mate:

if the rabbit has bloody discharge in the urine or feces, then it is recommended to remember whether she ate carrots or needles;

Note: if the farmer cannot pinpoint exactly what caused the bleeding, it is better to call the veterinarian. He examines the animals, prescribes medications and provides the necessary treatment.

Rabbit fur, down, and animal meat can be obtained with proper nutrition and proper care. If these conditions are met, then even a novice livestock breeder will receive tangible profits from the farm.