The horse is the owner of the largest eyes among all mammals living on the surface of the planet. When breeding, keeping and training horses, all the features of the vision of this animal should be taken into account. This will help you understand the reasons for behavior in different situations.

The horse's eyes are located on the sides of the skull. They are large, slightly convex, oval in shape, with a large pupil. Due to the oval shape of the eye, the horse's vision captures more of the surrounding area than human. Accordingly, even looking straight ahead, she covers nearby objects with her peripheral vision.

The equine eye consists of the cornea, lens, pupil, and retina. The eyeball has a complex structure, capable of transmitting and focusing beams of light, redirecting them to nerve endings, which, in turn, transmit impulses to the brain. Due to its complex structure, the equestrian eye is extremely susceptible to external stimuli, therefore the animal is prone to diseases such as cataracts, conjunctivitis, blepharitis, etc.

The sclera occupies 80% of the ocular surface. It is a dense, protective shell, the thickness of which ranges from 0.5 mm to 2.8 mm. It goes around the eyeball from the inside. It is the sclera that holds the muscles that allow the eye to move in different directions. But it does not completely cover the eyeball. In the posterior wall of the sclera there is a small opening through which the optic nerve passes, in the front is the cornea, which processes the light beam. The combination of the cornea and sclera forms a fibrous membrane that is visible on the face of the eye.

The lens is located behind the cornea. In between is a layer called the iris. The iris contains the pupil and muscles that allow the pupil to focus. When the muscles of the iris are working, constriction and dilation of the pupil can be observed. The iris also contains pigments that determine the color of a mammal's eyes. On the border of the iris, there are sections of an annular shape, which are called ciliary.

The inner ocular body is called the retina. It has two sections: blind and visual. The retina is adjacent to nerve endings that process the light signal into impulses. The main optic nerve passes through the middle part of the retina. The area of ​​the ocular body that surrounds the nerve is the blind spot.

Behind the lens is a fibrous body called the vitreous.

Interesting. The most common horse eye color is brown. But in rare cases, you can find a horse with blue, yellow, green and light brown eyes. The owners of blue eyes are most often piebald and bay horses, champagne animals have green eyes.

The horse's eye captures many more objects than the human eye.Many animals have practically spherical vision, which need to notice a predator and leave a dangerous place, saving their lives.

Horses' eye sockets protrude slightly forward, which allows you to determine the shape and range of objects. They also have areas that are called the blind spot. They are located in the back of the head, under the lower jaw of the animal, right under the nose, and extend approximately 110 cm forward from the nose. Binocular vision in horses is about 65 °, monocular - 285 °. 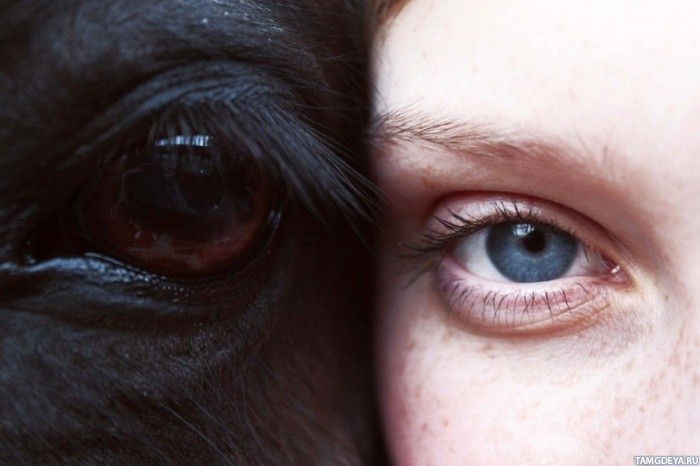 The horse's eye captures many more objects than the human eye

Horses have fairly sharp eyesight. Their visual acuity is less than that of a human, but more than that of dogs and cats. Although a horse can see distant objects more clearly than a person.

Important! In order to quench his thirst with water from the drinking bowl, which is located right in front of the animal's nose, he needs to turn his head so that the process does not happen blindly. The horse must see how far away the cup is, for this the head must be slightly turned. Only in this way will she be able to see the picture that fell into the blind spot.

The horse is able to distinguish colors. True, her palette of shades is rather scarce in comparison with the human one. But the animal is able to remember the main bright colors. Moreover, they are remembered at the level of emotional perception. For example, if she was praised and encouraged by a person dressed in a bright blue thing, later this color will be associated with calmness and joy.

Do they have night vision

Due to the fact that the eye of horses contains a vascular layer called the tapetum, these animals are perfectly oriented in the dark. They distinguish objects well, the distance to them in the dark, sometimes even better than on a sunny day. According to the studies conducted, scientists have come to the conclusion that a person does not see the way a horse sees. Due to the special structure of the eye, horses feel more comfortable on cloudy days than on a bright day.

Note! The transition periods from bright light to its absence are much more difficult for a horse than for a person. That is why for the eye to get used to daylight, when leaving a dark room, it is necessary to maintain a time interval of at least 2 minutes.

Can you estimate distance and depth

Why do horses cover their eyes with special shields? This action is performed in order to reduce the horse's vision. This allows the horse's vision to be focused only in the direction that the person needs, and to focus the horse's gaze on a specific object to which it should be reached. Horse blinkers are of several types, made of leather, plastic or wood, attached to straps that pass through the cheeks of a harnessed horse. Blinkers in front of horses are present in cases of horse participation in races, during training at hippodromes, training, etc. They are also useful for nervous and shy horses to reduce visible external stimuli. 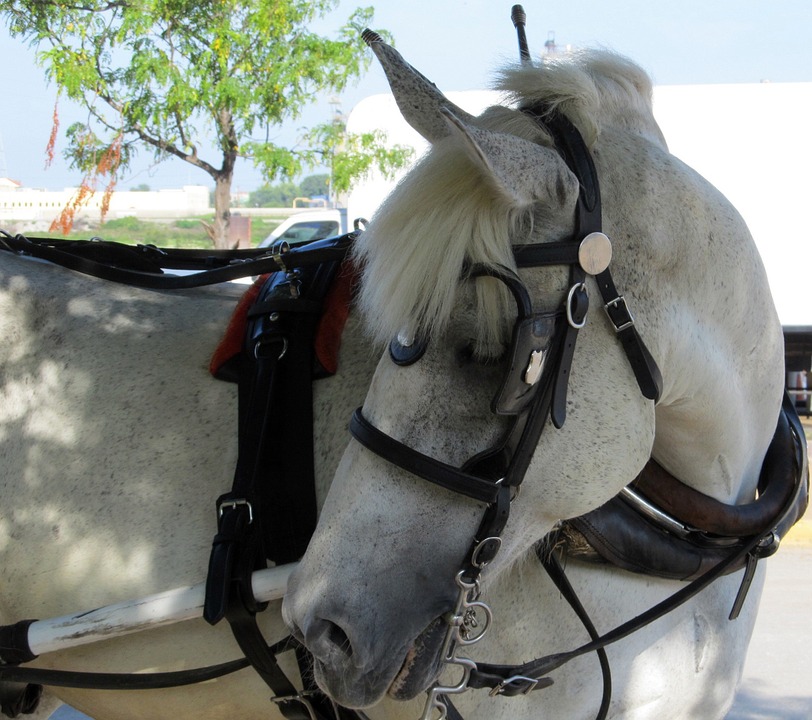 The shields on the horses' eyes have additional reinforcements, consisting of hard leather or wire. They are able to hold the lining in an immovable position. Why do horses close their eyes at their sides? Since a horse is a rather shy animal, it may be afraid that the viewing angle changes, for reasons beyond its control. Therefore, in order to calm the mammal and the ability for a person to establish contact with horses, it is extremely necessary to wear eyecups.

Among other things, they protect the horse's eye from external irritants such as dust, wind, moisture, etc. Considering the fact that the horse is accustomed to controlling all actions and reacting to movements that occur from the side and behind the back, the presence of shields that cover the lateral vision allow it to remain calm and balanced during the period of competition or fights and to hide from aggressive external factors.

Due to the strong genetic memory in horses, they have the so-called herd sleep. For a good rest, these animals only need 3 hours of sleep. That is, during the normal course of the day, which passes without stress for the horse, without a painful condition, with the presence of adequate nutrition, it should recuperate in the prone position, within 1.5 to 3 hours. She simply will not be able to lie on one side anymore, since, due to the pressure of the body weight on the lung, it causes certain discomfort. This period of full sleep, the horse spends with his eyes closed. According to the results of research, scientists have come to the conclusion that during deep sleep, the animal is able to see dreams and remember them. 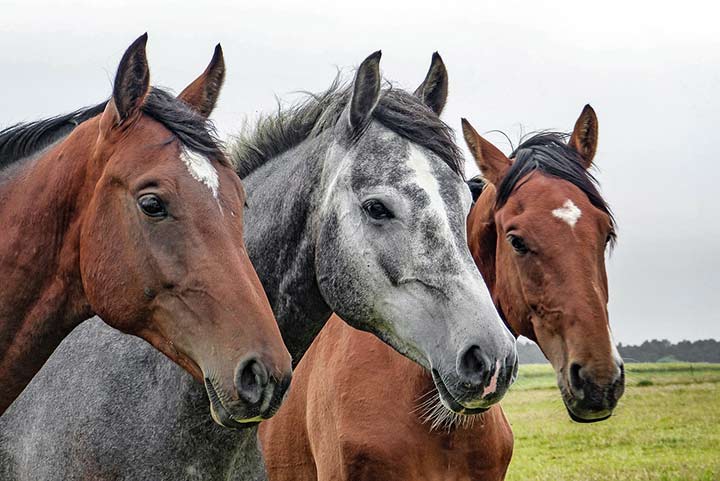 The rest of the time a horse spends in a stable in a stationary state is usually attributed to a nap. At this time, the horse suspends many physiological processes, and from the outside it seems that he is in deep sleep. But the horse's eyes are open when dozing. This is because the horse has the roots of a wild animal that is used to living in the herd. Sleeping in the herd follows its own rules. While most individuals are asleep, others doze and protect the deep sleep of the first, open eyes are needed to quickly react to dangerous movements occurring from any side. During such a rest period, the horse cannot dream of anything.

The peculiar structure of the body of these mammals allows them to evenly distribute their weight on all four limbs and fix it in this position, without creating unnecessary stress on the joints. Resting in this way allows the horse to assess the environment and monitor his safety. Even being in her usual stall, she cannot feel completely safe. This factor is also influenced by the fact that in a separate room the horse is isolated from its closest relatives, so no one except her can assess the possible danger and warn about it, respectively, you need to watch yourself.

Knowing the structure of the body of your pets is not only useful, but also very interesting. Learning about the features will help you better understand the behavior of animals and establish closer contact with them.