homeSmall cattleHow much milk does a goat give per day

How much milk does a goat give per day

Keeping small cattle (SMC) on the farm is beneficial. Dairy products from goats are in great demand. Such milk is absorbed faster by the body, rarely causes allergies, and is ideal for baby food. A livestock breeder who decides to purchase a representative of the small cattle first of all thinks about how much milk a goat gives per day. The milk yield depends on several factors. For example, animal breed, age, climate, nutrition, care activities. It is also important for a farmer to know how many years a cow has been milked, and when to expect the first product from it.

Special hormones affect milk production. They wake up after lambing and are responsible for lactation. Goats, like any other mammals, form a dairy product to provide nutrition for their offspring. 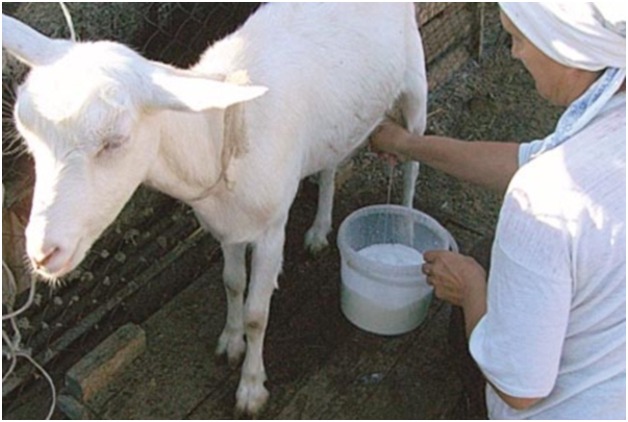 How much milk does a goat give

For a decent daily milk yield, you need to properly care for your pet. Keep the animal in a ventilated, clean and insulated barn. When winter comes, the MRS should not freeze. In summer, goats are released into pastures, where they eat plants. In addition to green fodder, livestock should receive a rich and moderately plentiful nutrition.

It has been found that with good care, non-dairy breeds produce 1.5 to 3 liters of milk daily. Milk MRS is another matter. One representative of such a group per day provides the owner with 5-7 liters of nutritious product with a fat content of 3.5-5.5%.

When does a goat start giving milk? The animal must be milked after the first pregnancy. It is then that the goat develops a delicious product.

How much milk does a cow give per day

The age of the female, which is considered sexually mature and can become pregnant, is 8-18 months. It was during this period that it was first covered. According to experienced veterinarians, it is best to get your pet pregnant at 1 year and 6 months. By this time, the animal's body completes its formation and is ready to maximize its potential. This is especially true of the udder, the glands of which are sufficiently developed and matured by 18 months. Therefore, the first lactation will not cause stress in the animal and will pass without disturbances. In addition, if you start a productive life of a goat at a year and a half, you can extend its ability to reproduce and produce milk.

Additional Information. A highly productive, experienced goat is suitable for mating. In this case, there is a high probability of a quiet pregnancy and healthy offspring.

It is believed that mating is allowed to be organized in spring and autumn. But veterinarians advise not to violate the historical memory of animals and carry out the process from early October to early December. The ancestors of modern goats at this time came to hunt to give birth to offspring in the spring. The easiest way to feed a kid is in spring, as fresh grass appears on the meadows. The average gestation period in goats is 5 months and 15 days.

Before the first lambing, it is impossible to milk the goat's milk. Exceptions are cases when a representative of a dairy breed suffers from swelling of the udder from milk that was formed before mating.Then it is allowed to help the animal and remove excess fluid produced. But most MPCs don't have that. The only udder procedure that veterinarians recommend before the first lambing is a small massage of the lobes. Thus, the owner teaches the animal for subsequent milking and helps the glands to properly tune in to milk production.

How many times a day does the rabbit feed the newborn rabbits?

In addition to the question “when does the goat start milking?”, Farmers are interested in how many years the goat has been milked.

Productive milk longevity depends on many factors. For example, what breed is the animal. The zaanenka is considered a long-liver in the dairy cattle category. Representatives of the breed have an average life expectancy of 17-21 years. Other species live on average 12-16 years. The length of life also depends on how many years the goat will produce milk. 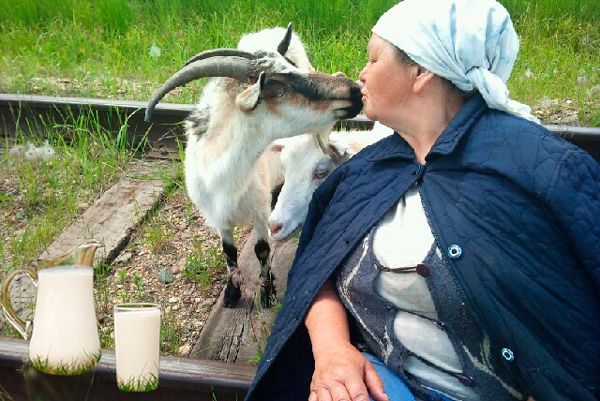 With proper care, lactation lasts about 12-13 years. The owners can boast of such results, who provide their pets with the correct content regarding sanitary requirements. Among the activities to maintain health are the following:

The productivity of MRS depends on age. You should not expect large volumes of milk from the first flow. After the first lambing, the animal only starts to increase the rate of product production. Farmers receive maximum milk yield after the third and fourth lambing. At this time, you should notice how many liters of milk the goat gives per day. Veterinarians say that it is during this period that the real productivity of the individual is established.

If we talk about age, then milk yield grows by 4-5 years of life of the goat. After the pet turns 7-8 years old, the amount of milk will decrease. Universal cattle (dairy and beef) are allowed to eat meat at this time. Dairy breeds continue to hold on.

Note! The decline in dairy production is due to health problems. In older goats over seven years old, teeth begin to crumble and fall out. The pet can no longer eat enough food. Accordingly, the work of the mammary glands decreases.

How many months a year does a goat give milk? The animal forms a dairy product after lambing. Lactation lasts differently for different breeds. In the Zaanen and Gorky breeds, these indicators are the highest. Such individuals provide the owners with a high-quality fatty product for 8-9 months a year. Some animals can produce milk even just before lambing. But it is not recommended to remove the liquid. The conditions for starting the goat before giving birth should be observed. This is the only way to maintain the dairy longevity of the animal.

Regular goats have slightly more modest lactation times. It is about 6-7.5 months a year. This time falls on summer, autumn and part of winter. The owner receives the most milk in the summer, when it is possible to feed the pet with juicy feed.

Milk after the first lambing

The time when goats begin to give their first milk is after the first pregnancy. How much milk do you get from the primary flow? If the owner decided not to remove the kids from the mother, then milk for personal consumption can be donated only when the babies are 90 days old. At this time, they are removed from the goat and gradually begin to transfer from milk to normal food. The owner will receive about 1-1.8 liters of product per day from the first-flowering of a common breed. From highly productive young animals it is possible to get 3-4 liters daily. 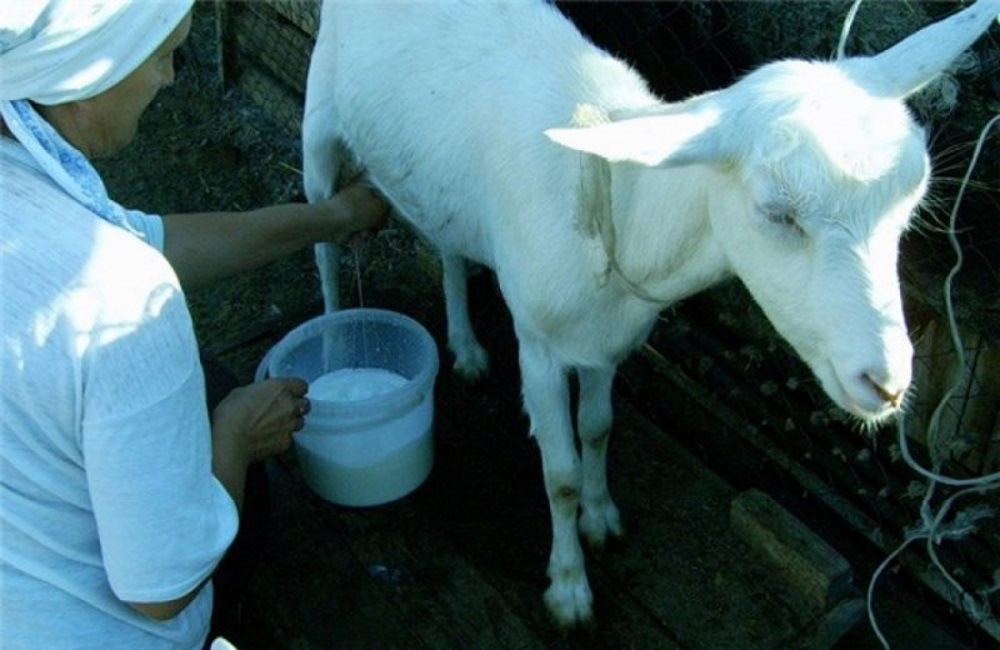 The time when goats begin to give their first milk is after the first pregnancy.

A similar situation will be observed in the event that the owner, after birth, transplanted the kids from the first heifer. The goat has no milk for the first week. Instead, colostrum is formed in the udder. This is a fatty mass that increases the immunity of the offspring. All colostrum must be donated and given to the kids. Further, within 1-3 months, most of the milk from the goat goes to feed the young.

Note! Only after three months they are transferred to succulent feed, grain and vegetable nutrition.

Getting milk without lambing

Can a goat produce milk without covering and lambing? Veterinarians agree on this issue. A goat needs to be covered every year to keep the body healthy and produce enough milk. However, according to reviews, there are many cases when an animal was handed out without giving birth. Such milk is popularly called "girl's" milk, and it is not much inferior to the usual product.

Why does a goat give little milk

Sometimes novice breeders are faced with the problem of a sharp decrease in the amount of the product received. There may be several reasons. The most obvious ones are:

If the goat is not producing enough milk, what to do? In this case, you should check the health of the pet. If she is suffering from mastitis, the owner needs to see a veterinarian. This is a rather serious and dangerous disease, but it is not difficult to cure it. 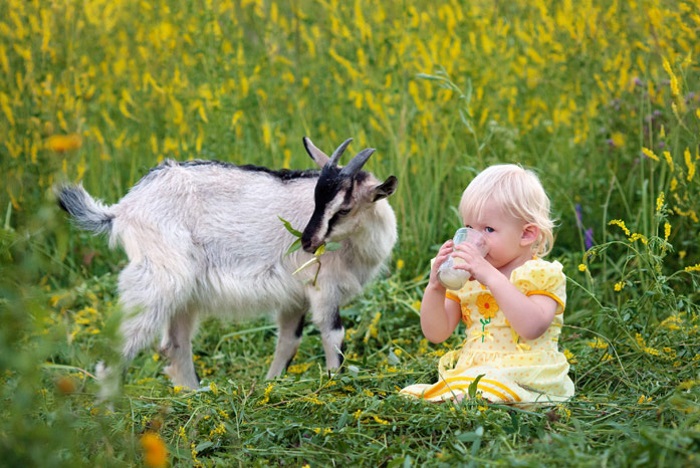 To help a lactating animal, it is important to provide it with the right, balanced diet. The diet should include foods:

Note! The goat should have enough clean water.

When milking, pay attention to the condition of the udder. Before the procedure, it is massaged and rubbed with petroleum jelly or another agent that prevents the formation of wounds and cracks during milking.

Note! It is important for the breeder to pay special attention to keeping pets. The stable where the cattle live must be clean. Drafts and high humidity should not be allowed. This inevitably leads to a weakening of the animal's immunity and a decrease in lactation.

Goats are unpretentious animals. But in order for them to give enough milk, they need good care. The amount of milk a farmer can get from one individual depends on its breed and age. Highly productive species give 6 liters daily. Conventional breeds provide 2-3 liters for their owners. The highest milk yield is obtained after 3-4 lambing.

Fruit bushesStrawberries do not bloom but give a mustache

FlowersWhy large-leaved hydrangea does not bloom, but gives leaves