Any gardener who is worried about healthy berry bushes cannot help but worry about the age-old question of pests and diseases that pose a threat to them. An experienced gardener, having a large arsenal of modern means designed to protect berry bushes of gooseberries and currants from diseases, cannot be sure that the bushes of his garden will not be infected with this or that disease and will not be influenced by insect pests.

The ability to properly plant berry bushes and correctly apply agrotechnical measures does not exclude the constant examination of the bushes. It will allow you to see the signs of gooseberry disease in time and take appropriate action. Undoubtedly, it is possible to get in the garden such varieties that are more resistant to diseases, and those that are most susceptible to them, uproot. But, as experienced gardeners say, there is no need to rush with this, since such varieties of berry bushes have not yet been bred that do not get sick at all. On the other hand, it’s a pity to part with your favorite berries. In this case, preventive work in the garden should be carried out. 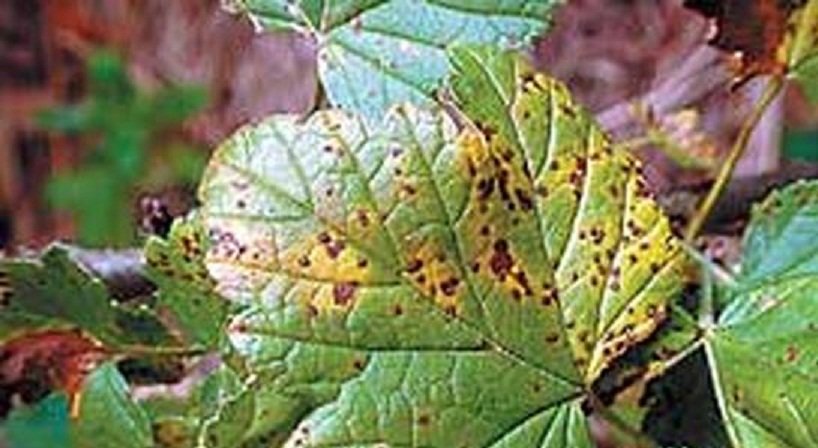 The well-known rule: it is easier to prevent a disease than to cure it, also works in gardening. That is, you need to constantly be engaged in prevention, to go ahead of the appearance of signs of disease in the bushes, not to wait until, for example, a yellow bloom appears on the branches of the gooseberry, or the berries are covered with a white bloom.

As preventive measures, experienced gardeners include the following actions that must be performed, so that the gooseberry bushes are healthy and bring a good harvest of berries:

Description of diseases and treatment of gooseberries

If berry bushes have undergone an insidious disease, there are many effective ways to get rid of it. The main diseases from which gooseberry bushes most of all suffer, and if overlooked, die, include: spheroteka or powdery mildew, anthracnose, septoria, columnar rust, scab.

One of the most common and dangerous diseases for berry bushes is powdery mildew. The disease is fraught with the fact that it affects the entire plant. The first symptoms of the gooseberry spheroteca appear in the spring, after flowering. Shoots, young leaves, and then berries are covered with a white bloom, which every day spreads over a large area, capturing the entire plant. The plaque itself becomes similar to brown felt, the shoots bend and dry out. If urgent measures are not taken, the plant will become infected completely and die.

Reference. The reason that caused the disease of the berry bush is a fungus that appears on the plant from oversaturation with nitrogenous fertilizers. The spread of the disease is conidiospores.

What to do if the gooseberry berries are covered with a white bloom in summer? It is necessary to spray with a solution of soda ash mixed with laundry soap. The proportions are as follows: 10 l of water + 40 gr. soap + 50 gr. soda.Measures to combat this disease include early, before leafing, spring spraying of shrubs and the soil under them with 1% copper sulfate. It is necessary to spray, since the spores of the fungus do not die in winter frosts, but overwinter on the affected shoots and foliage under the bush. 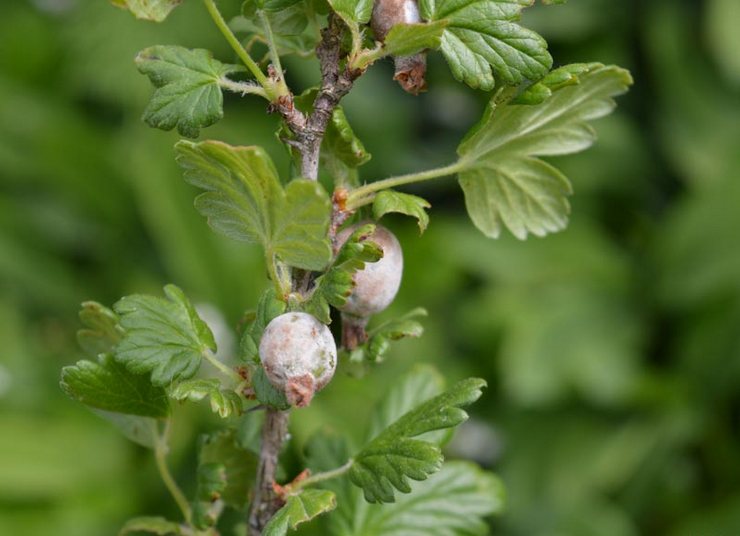 Many gardeners are armed with a folk (bacterial) method of combating this disease. They know how to treat gooseberries from white bloom on berries. This method of combating the disease consists in spraying the diseased plant with manure infusion. The proportion of this infusion: water 1 part, manure 2 parts. Infuse stale manure for three days. The bacteria in its composition are capable of destroying the fungus.

An equally common method of combating powdery mildew is spraying the bushes every 10 days throughout the growing season with the following composition: dilute 1 liter of whey in 10 liters of water and add 15-20 drops of iodine.

Council. With a neglected disease, when a white bloom has appeared on the gooseberry berries, it is necessary to use chemicals to save the plant.

The harvest in this case is already lost. Remedies include: Fitosporin, Oxyhom, Topaz. On the instructions for the use of drugs, norms are given that must not be exceeded when spraying, so that the plant does not die from chemistry.

Quite often, beginners who are engaged in gooseberry cultivation on the site are interested in whether it is possible to use the berries that are coated with a bloom in food or cook gooseberry jam. With a white or dark bloom, they do not look appetizing, but there is an option how to quickly wash off black bloom from gooseberries. You need to soak the berries in salted water for 30 minutes, then wash off this mold by wiping each berry dry.

This fungal disease primarily affects the leaves. They become covered with dark brown spots that merge, then dry out and fall off. If novice gardeners cannot understand why leaves are drying on the bushes near the gooseberry, they should pay attention to whether the plant is sick with anthracnose. In addition to drying out the leaves, the plant practically does not give an increase in young shoots, since it is exhausted by the disease.

The plant is infected, as with powdery mildew, with condiospores in the summer, especially after rainy weather. Traditional early spring spraying of bushes with a 1% solution of copper sulfate, as well as when the first signs of the disease appear, after harvest, it is used for infection with powdery mildew.

Council. Spraying is carried out at least four times: before leaf blooming and flowering, after it, 2-3 weeks after the second spraying and after harvesting.

As in previous diseases of the berry bushes, with the disease of septoria in gooseberries, the leaves are the first to suffer. They are covered with round spots of gray shade with a dark border, then small black dots appear on them. Spores of the pathogen fungus are based at these points. Leaves curl, dry out and fall off. The plant remains without leaves over time. 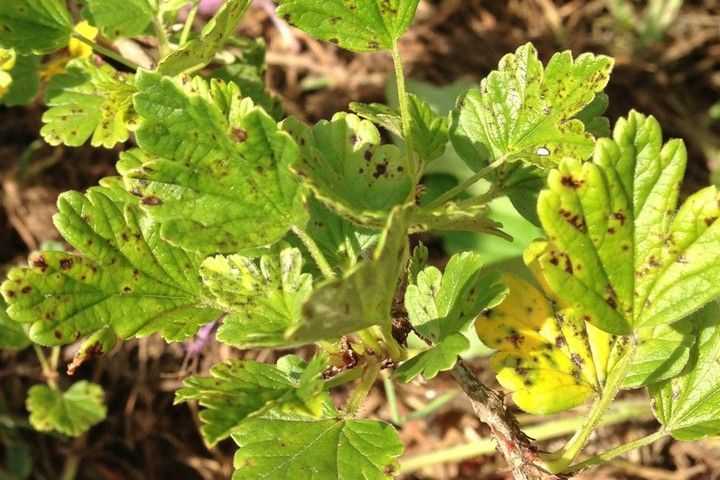 The methods for dealing with white spot are the same as for anthracnose. First of all, the removal of diseased leaves, collection of fallen leaves and their destruction. It is imperative to process the bushes and soil under the bushes with nitrafen or copper sulfate. From chemicals suitable drugs: Horus, Switch, Antracol, Topaz.

This disease affects the foliage of the gooseberry. The causative agent is a parasitic basidiomycete fungus. The defeat of shrubs occurs in the middle of summer on the lower side of the leaf. Irregular yellow spots appear on it, on which the pads of the yellow spores of the fungus are located. All summer and autumn, the parasitic fungus is on the gooseberry, then its spores are carried by the wind and insects.

Attention! Gardeners note that fungal spores overwinter well on sedge leaves.If a section of a garden with gooseberry plantations is located near its thickets, measures must be taken to destroy it in the vicinity of the garden.

Measures to combat this disease include the treatment of bushes with 1% Bordeaux liquid at least four times spraying: before leafing out, after flowering, 2-3 weeks after the second spraying and after harvesting, in case of a large zone of disease severity. Fallen leaves affected by columnar rust should be constantly removed from the site and destroyed.

Gooseberry propagation by cuttings in spring

In addition to diseases, which are quite often exposed to berry bushes of gooseberries and currants, gardeners are no less troubled by such pests as different types of sawfly, moths, scale insects and aphids. These uninvited guests can completely ruin the crop, undermine the root system of the bushes and destroy the leaves.

Small insects - gooseberry sawflies (pale and yellow), lay their eggs on the foliage of berry bushes. Small caterpillars that look like larvae cause irreparable harm to plants. If you do not fight these pests and do not know what to do, all the leaves of the gooseberry will be eaten. 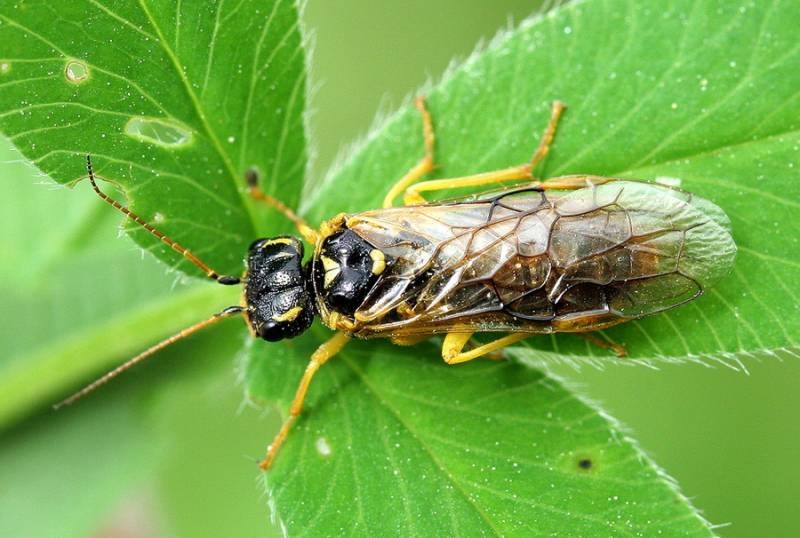 Treatment of bushes with insecticides gives a long-term effect in the fight against this pest. You can use the recommendations of experienced gardeners, suggesting spraying with bitter wormwood, tincture of tobacco or makhorka. A very effective remedy for the destruction of sawfly larvae is a solution of soap and wood ash. The measures to combat the sawfly include manual collection of pests.

An equally harmful insect is the gooseberry moth. Hibernates as a pupa in the ground. With the arrival of spring, butterflies appear from the pupae. They lay eggs in flower buds. The larvae develop in the flowers of the bush, eating the fruits from the inside. They are no more than 1.4 cm long, gray-green in color. A thin cobweb can be found on bushes infected with larvae.

You can get rid of this parasitic insect by doing a number of activities on your site:

One of the most common gooseberry pests is sometimes called the shoot aphid. She sucks the juice from leaves and shoots. As a result, the leaves dry and curl, young shoots are bent and do not grow. This leads to a slowdown in the growth and development of the berry bush.

One of the most effective means of fighting aphids is a solution of laundry soap and soda. For 10 liters of water - 40 gr. soap + 50 gr. soda. Iskra, Karbofos are used from chemistry.

A small coleopteran insect that feeds on the sap of a plant on which it will settle. Distributed in gardens, mainly in areas with cold climates. The insect is attached to a branch and feeds on sap through a long proboscis. In winter, scale insects freeze, reviving at the time of flowering of the berry bush. 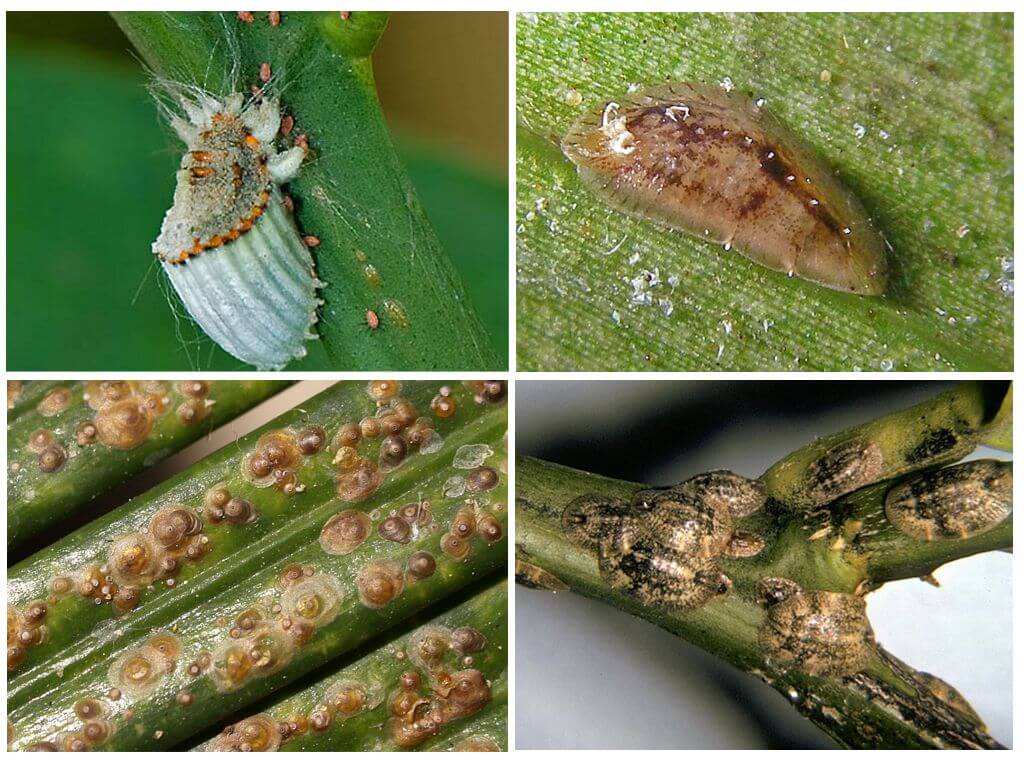 Gardeners recommend removing heavily damaged shoots, whitening the bark of a shrub with slaked lime. Scabbards cannot wash off the bark with any solutions; they must be brushed off the bark of the branches with a brush.

Note! Gardeners recommend checking the bush seedlings purchased not only in the markets, but also in specialized stores, for pathogens and insect pests. Gooseberry varieties that are resistant to diseases and pests in a particular region should be planted on the site.

If you do not want to use chemicals in your personal plot, you can always find an alternative among folk remedies.

Fruit bushesSpring processing of currants and gooseberries from pests 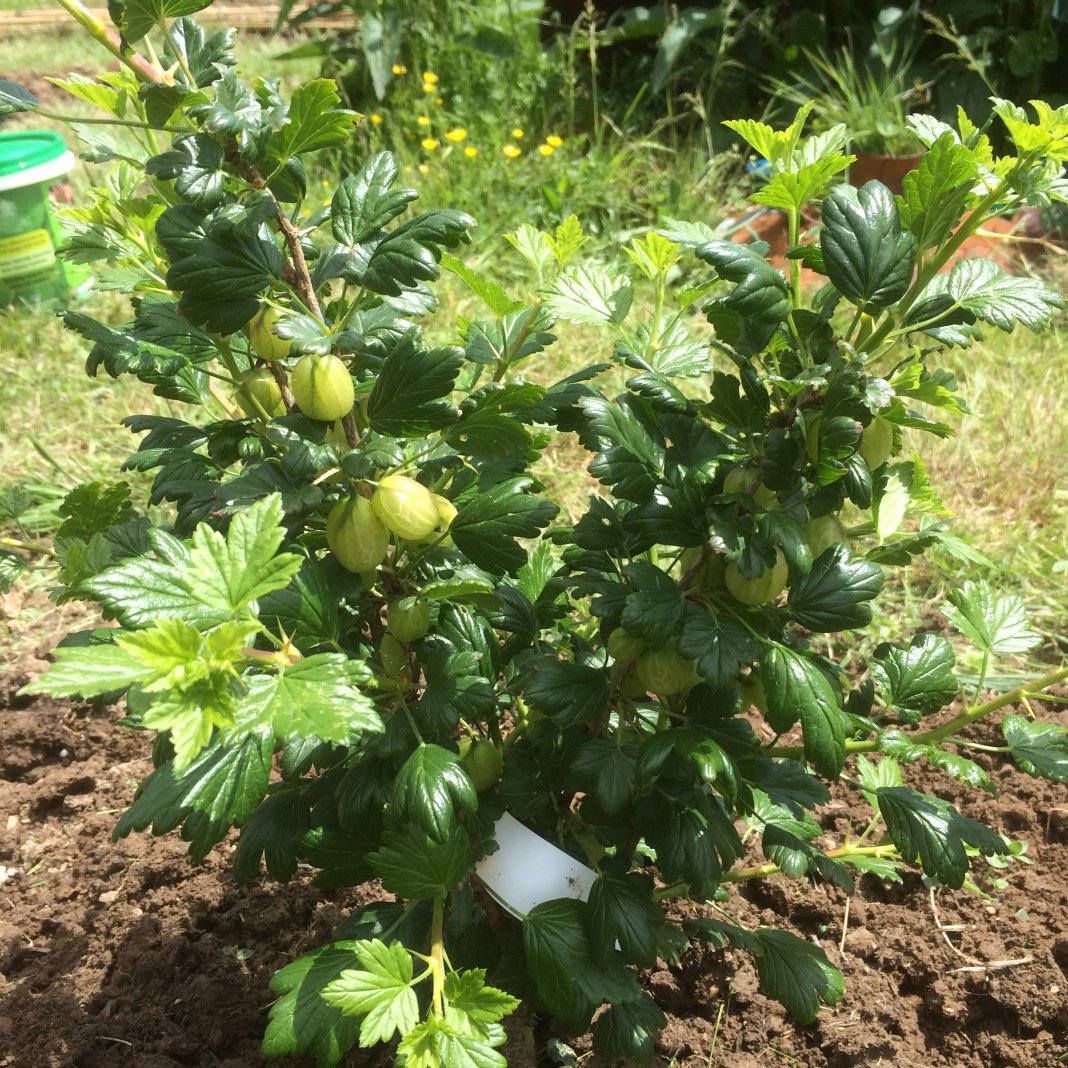 Fruit bushesTransplanting gooseberries in the spring to a new place

Fruit bushesProcessing gooseberries in the spring for diseases and pests 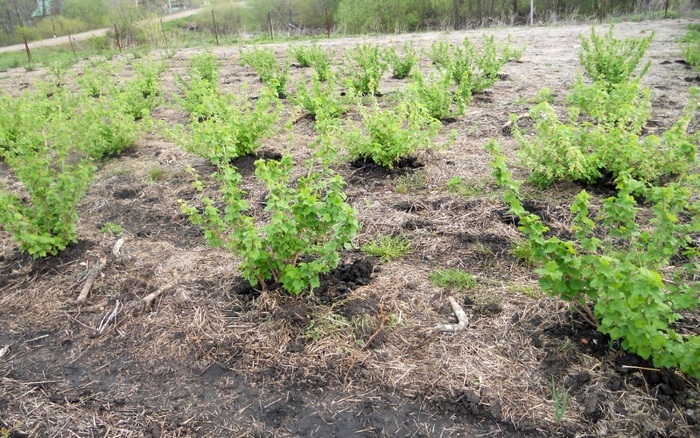 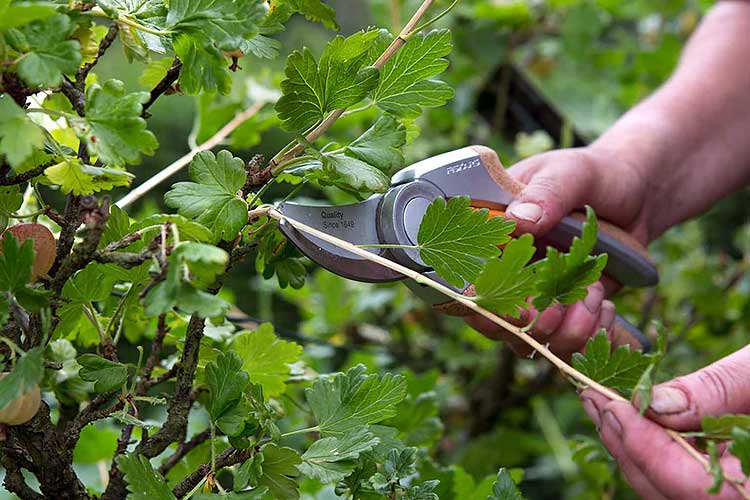 Solanaceous and pumpkinPruning gooseberries in spring 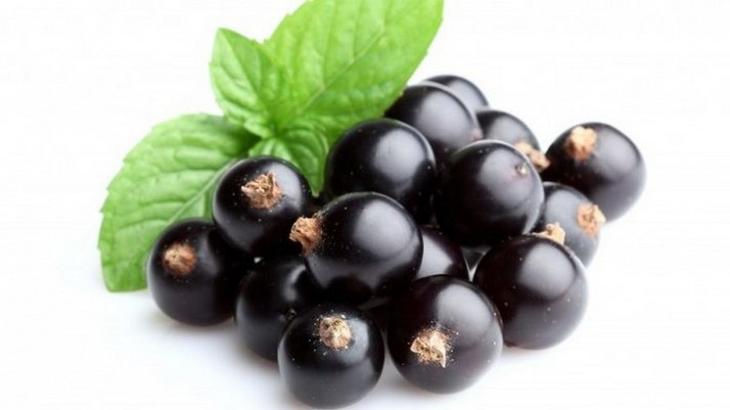